While the Earth is spinning on its axis every 24 hours giving us day and night, it is also orbiting the sun once a year. We experience summer and winter seasons because the Earth’s axis is tilted relative to the ecliptic plane, with the Southern hemisphere tilted towards the sun and the Northern hemisphere tilted away from it for part of the year and vice-versa when the Earth is on the other side of the sun. Sunshine and daylight hours peak at the summer solstice (midsummer), the longest day of the year, and wane thereafter until the winter solstice (midwinter), the shortest day of the year. (I don’t even remember learning all that at school, so I hope I got it right!)

In some Pagan traditions, mock battles are enacted at the winter and summer solstices between the Oak King and the Holly King, representing the god who reigns during the waxing half of the year and the god who reigns during the waning half of the year respectively. The Oak King slays the Holly King at the winter solstice, while the Holly King slays the Oak King at the summer solstice. The dethroned king returns to reclaim his throne six months later, and the best explanation I have seen for his whereabouts during his absent six months is ruling the opposite hemisphere!

Oak and holly were both classified as chieftain trees under the Brehon Laws, Ireland’s native legal system prior to it being replaced with English common law in the 17th century. Brehon Laws provided protection for 28 trees, with penalties for harming them based on their status: chieftain trees (“nobles of the wood”), peasant trees (“commoners of the wood”), shrub trees (“lower divisions of the wood”) and bramble trees (“bushes of the wood”) [Source: Living Tree Educational Foundation and The Old Irish tree-list, as translated by Fergus Kelly].

Oak (Quercus robur) is the most important forest tree of north-western Europe, a large sturdy tree forming the canopy layer of woodlands. The timber is highly durable and used for all kinds of carpentry, the bark is used for tannin (used in the tanning process to make leather from raw animal hides), and the fruit (acorns) is used for feeding pigs. It provides food and shelter to hundreds of species of wildlife.

Although holly (Ilex aquifolium) is an evergreen tree, it is not a conifer softwood but broadleaved, with very hard and heavy white wood suitable for carving. It is a very colourful tree with its shiny dark green leaves and red berries, especially noticeable during the white winter months. Its prickly leaves make it suitable for planting in hedgerows, and it also forms part of the understorey layer of woodlands (below the canopy layer).

Both trees can live for hundreds of years.

Holly with its red berries was one of the bright evergreens traditionally used to “deck the halls” at Yule, brightening up the home and encouraging the return of light, warmth and new life. It was traditionally paired with ivy, with the holly and the ivy representing masculine and feminine energies respectively. However, note that if a holly spray has red berries on it then it came from a female plant. Holly is a dioecious plant species, which means that male and female flowers grow on separate plants. The berries are only found on female plants that have been fertilized by pollen from a male plant. Note also that holly berries, that remain on the tree throughout winter when they soften and become less bitter and more palatable, are somewhat toxic to humans although they are not harmful to birds.

Some people believe that the folklore of the Oak King and the Holly King is linked to the symbolic medieval tale of Sir Gawain and the Green Knight. The giant Green Knight entered the court of King Arthur at midwinter wearing a spray of holly and challenged those present to behead him on the condition that he may return the blow at a later date. Gawain accepted the challenge and beheaded the Green Knight (who did not die and rode away with head in hand), after which Gawain was involved in a series of adventures where his character was tested. Among other things, the tale represents the contrast and conflict between the powerful perpetual forces of Nature and our wild animal instincts, and the civilized world and chivalry represented by King Arthur’s court. 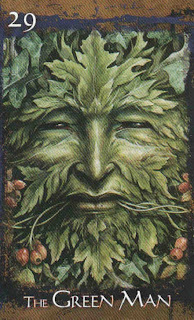 In some Wiccan traditions, the Oak King (the Light King) and the Holly King (the Dark King) are viewed as dual aspects of the Horned God consort to the Goddess. The Horned God is sometimes equated with Cernunnos, the Celtic horned god associated with wild animals and male fertility and virility. There are similarities between the Horned God and the pagan Green Man symbol of vegetation, trees, plants and woodlands found in medieval art, whose mask is usually made of oak leaves.

The King is dead. Long live the King!