“Into this wild Abyss,
The womb of Nature, and perhaps her grave,
Of neither sea, nor shore, nor air, nor fire,
But all these in their pregnant causes mixed
Confusedly, and which thus must ever fight,
Unless the Almighty Maker them ordain
His dark materials to create more worlds,
Into this wild Abyss the wary Fiend
Stood on the brink of Hell and looked a while,
Pondering his voyage; for no narrow frith
He had to cross.”
Paradise Lost, John Milton (1608-1674)
.
I vaguely remember catching The Golden Compass when it was screened on M-Net in December 2008, but was sufficiently preoccupied with Life at the time to miss much of its meaning. While re-reading Chanah’s archived Lenormand posts recently, I noticed a comment about the book on which the film is based which inspired me to revisit the story, the controversy around it and “that clockwork device with 36 symbols” (as described by Chanah). I realize this may be old news to anyone reading this, but I thought I would share it anyway.
.
The storyBook: Northern Lights (Scholastic, 1995), the first book in Philip Pullman‘s His Dark Materials trilogy for young readers set in multiple parallel worlds.
Film adaptation: The Golden Compass (New Line Cinema, 2007), Rated PG-13.
Genre: Fantasy, science fiction, action and adventure.
Setting: An alternative reality in Oxford and the Arctic.
Protagonist: Lyra, an 11-year old girl raised as an orphan in Jordan College, Oxford.
Antagonist: Mrs Coulter, an agent of a powerful repressive religious authority known as the Magisterium.
Quest: To save Lyra’s best friend Roger and other children kidnapped by the Magisterium in order for scientists to perform cruel experiments on them.
Other characters: Lyra’s explorer uncle Lord Asriel, personal daemons (talking animal companions), talking armoured polar bears, gyptians (nomadic water-travellers) and witches, among others.

The trilogy was partly inspired by Milton’s epic poem Paradise Lost in which a vengeful God banishes a rebellious Satan from Heaven and later banishes Adam and Eve from the Garden of Eden after they are tempted by Satan and taste the forbidden fruit of the tree of knowledge of good and evil. Lyra is analogous to Eve in the Garden of Eden. Mrs Coulter, who is actually Lyra’s mother, and the Magisterium are analogous to the Christian Church. Lord Asriel, who is actually Lyra’s father, aspires to establish a humanistic Republic of Heaven and is analogous to Satan. God “the Authority”, who is actually an imposter, dies in the final book of the trilogy The Amber Spyglass.

Pullman is a self-described atheist/agnostic who openly challenges religious dogmatism and intolerance and promotes freedom of thought and expression. Pullman (born 1946), prominent British atheist Richard Dawkins (born 1941) and the late “antitheist” Christopher Hitchens (1949-2011) all studied at Oxford University. While the other two have focussed on non-fiction, notably in works such as The God Delusion (2006) by Dawkins and God Is Not Great (2007) by Hitchens, Pullman prefers to write fiction for both children and adults. One may say these anti-religious themes have no place in children’s fiction (and some do), but in that case there should be no room for religious themes either (in works of fiction widely read by children, such as The Lord of the Rings, The Chronicles of Narnia and The Bible). That’s never going to happen, so Pullman provides some sorely needed balance.

The Magisterium of the Catholic Church is a real entity with the authority to interpret scripture and define dogma:

“‘The task of giving an authentic interpretation of the Word of God, whether in its written form or in the form of Tradition, has been entrusted to the living teaching office of the Church alone. Its authority in this matter is exercised in the name of Jesus Christ.’ This means that the task of interpretation has been entrusted to the bishops in communion with the successor of Peter, the Bishop of Rome … The Church’s Magisterium exercises the authority it holds from Christ to the fullest extent when it defines dogmas, that is, when it proposes truths contained in divine Revelation or also when it proposes in a definitive way truths having a necessary connection with them.”

The Vatican newspaper, L’Osservatore Romano, criticized the focus on individualism in the film:

“It’s a film that leaves one cold, because it brings with it the coldness and the desperation of rebellion, solitude and individualism … In the world of Pullman, hope simply doesn’t exist, in part because there is no salvation but only personal, individualistic capacity to control the situation and dominate events.” Vatican paper says ‘Golden Compass’ lacks hope, leaves viewer cold  by John Thavis, Catholic News Service 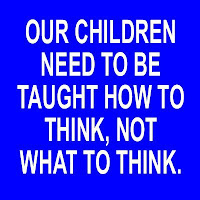 .
“Instead, we must turn all of our educational efforts to training our children for the choices which will confront them. Education, in the home even more than at school, instead of being a special pleading for one régime, a desperate attempt to form one particular habit of mind which will withstand all outside influences, must be a preparation for those very influences. Such an education must give far more attention to mental and physical hygiene than it has given hitherto. The child who is to choose wisely must be healthy in mind and body, handicapped in no preventable fashion. And even more importantly, this child of the future must have an open mind. The home must cease to plead an ethical cause or a religious belief with smiles or frowns, caresses or threats. The children must be taught how to think, not what to think. And because old errors die slowly, they must be taught tolerance, just as today they are taught intolerance. They must be taught that many ways are open to them, no one sanctioned above its alternative, and that upon them and upon them alone lies the burden of choice. Unhampered by prejudices, unvexed by too early conditioning to any one standard, they must come clear-eyed to the choices which lie before them.” Coming of Age in Samoa, Margaret Mead (1901-1978)
.
.
The device

Before Lyra leaves Oxford to go live with Mrs Coulter, the Master of Jordan College gives her a rare truth measuring instrument known as an alethiometer (aletheia is Greek for truth):

“It lay heavily in her hands, the crystal face gleaming, the golden body exquisitely machined. It was very like a clock, or a compass, for there were hands pointing to places around the dial, but instead of the hours or the points of the compass there were several little pictures, each of them painted with extraordinary precision, as if on ivory with the finest and slenderest sable brush. She turned the dial around to look at them all. There was an anchor; an hourglass surmounted by a skull; a chameleon, a bull, a beehive … Thirty-six altogether, and she couldn’t even guess what they meant.”
Northern Lights, Philip Pullman 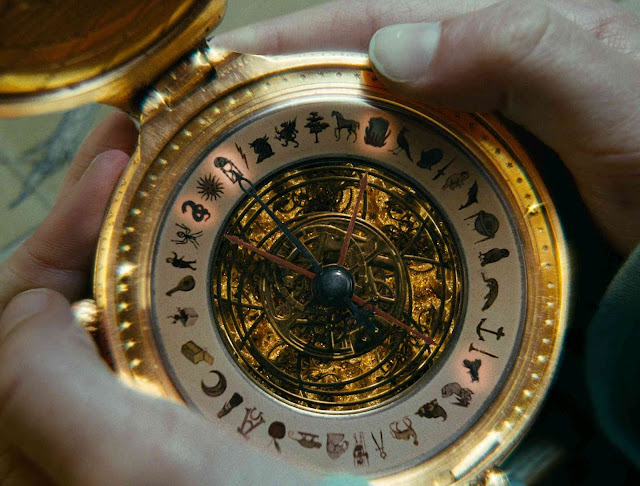 .
This divination device is powered by a mysterious invisible cosmic substance known as Dust which represents consciousness:

“Dust is only a name for what happens when matter begins to understand itself.”
The Amber Spyglass, Philip Pullman

The trilogy also features the I Ching (Book of Changes) divination system comprising 64 hexagrams and their meanings:

“Dust had many other ways of speaking to human beings, and one of them was the method from China that used those symbols.”
The Amber Spyglass, Philip Pullman

It would appear that Pullman invented a variation of the 19th century Petit Lenormand cartomancy system which also comprises 36 iconic symbols for his story. In an interview in 2005, Pullman told Jennie Renton of textualities.net that the alethiometer was inspired by memory theatres (mnemonic devices) andemblem books from the Renaissance era.

The US publisher Random House has published some cool resources on its website including How to Read the Alethiometer and Definitions of Symbols of the Alethiometer, i.e. an alethiometer dictionary (see also all 36 symbols and meanings on Wikia). There is significant emphasis on forming the question as well as on interpreting the answer using the same symbols for both, and on the internal intuitive process as well as the external mechanical process of interpretation.

Replicas were produced of the alethiometer used in the film and if you have the hardware there’s also an app for it (I hope that’s the correct link, please let me know if you do).

[Recommended reading: God in the dust by Donna Freitas]

“‘T is strange, – but true; for truth is always strange;
Stranger than fiction; if it could be told,
How much would novels gain by the exchange!
How differently the world would men behold!
How oft would vice and virtue places change!
The new world would be nothing to the old,
If some Columbus of the moral seas
Would show mankind their souls’ antipodes.
What ‘antres vast and deserts idle’ then
Would be discover’d in the human soul!
What icebergs in the hearts of mighty men,
With self-love in the centre as their pole!
What Anthropophagi are nine of ten
Of those who hold the kingdoms in control
Were things but only call’d by their right name,
Caesar himself would be ashamed of fame.”
Canto XIV, Don Juan, George Gordon Byron (1788-1824)
.
Also published here: http://mywingsofdesireblog.blogspot.com/
.